Ever heard about snus? No, its not a spelling mistake for snuff. Its a smokeless way of getting nicotine.  Well, there is actually more to it than that...  Basically it is loose tobacco packed in small bags (like tea bags), which is then placed in the mouth (usually under the top lip) to release nicotine. The porous bag causes the release of Nicotine which is then absorbed through the mucous membrane in the mouth, to give either an energy kick or a relaxing experience.

Snus (pronounced like snooze) is a product that originated in Sweden in the late 17th Century as a "replacement" to snuff. 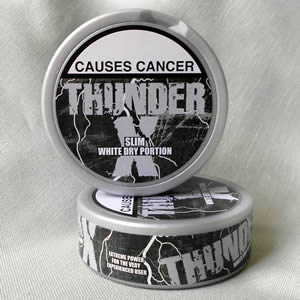 The use of nasal snuff became fashionable in all the courts of Europe, but the French Revolution put an end to the use of nasal snuff, which was largely replaced by cigars, except in Sweden.  In Sweden, snuff was mainly replaced by a pinch of moist snuff (snus) placed under the upper lip.  It became so popular amongst the Swedes that factories were developed to ensure sufficient production. And then came cigarettes.

American cigarettes became the next best thing amongst the upper classes, relegating snus rural and lower income population.  The production of snus was almost discontinued, until restrictions on cigarette smoking started to spread around the world.  Snus became again the accepted way to use tobacco, spurred on by the introduction of Snus portion packs in the 1970s. Instead of having to pinch together loose snus to form a shape suitable to slip under the top lip, one could just open a can, take out a portion (like a tiny tea bag) and discreetly pop it into place.

It is still today exceptionally popular in Sweden and is now also spreading to Denmark, Australia and the US. Snus is an oral tobacco product made under the regulations of the food acts in both Sweden and Denmark.

It is said to be less harmfull than cigarette smoking, but of course, being nicotine, it is not harmless.  Apparrently many ex-smokers use snus as a replacement to still get the nicotine hit without the other harmfull additives generally found in cigarettes (like tar).  Its popularity is also due to the fact that you can have a "smoke" without smoking, therefore more socialy appealing. You could be in a meeting and gently slip a snus bag in your mouth, eliminating the need for a "smoke break". You get your "Vitamin N" while no-one will even notice or affected - well, maybe they'll notice the energy burst.

But what does the science say?  Reccent studies suggests that it is indeed a more safer option of consuming nicotine.  Sweden, for example, now has the lowest rate of tobacco-related diseases in Europe(1). While using Snus is still highly addictive, it is widely held to be between 95% and 99% less harmful than smoking(6).

A research article(5) on Tobacco Control's website have these results and conclusion:

Results: Snus is manufactured and stored in a manner that causes it to deliver lower concentrations of some harmful chemicals than other tobacco products, although it can deliver high doses of nicotine. It is dependence forming, but does not appear to cause cancer or respiratory diseases. It may cause a slight increase in cardiovascular risks and is likely to be harmful to the unborn fetus, although these risks are lower than those caused by smoking. There has been a larger drop in male daily smoking (from 40% in 1976 to 15% in 2002) than female daily smoking (34% in 1976 to 20% in 2002) in Sweden, with a substantial proportion (around 30%) of male ex-smokers using snus when quitting smoking. Over the same time period, rates of lung cancer and myocardial infarction have dropped significantly faster among Swedish men than women and remain at low levels as compared with other developed countries with a long history of tobacco use.
Conclusions: Snus availability in Sweden appears to have contributed to the unusually low rates of smoking among Swedish men by helping them transfer to a notably less harmful form of nicotine dependence.

The Royal College of Physicians compiled a report(7) and states: "It demonstrates that smokers smoke predominantly for nicotine, that nicotine itself is not especially hazardous, and that if nicotine could be provided in a form that is acceptable and effective as a cigarette substitute, millions of lives could be saved."  (full report)